1. What platforms and devices are supported for GPU encoding

MCEBuddy supports Intel (QuickSync), NVidia (NvEnc/CUDA) and AMD (VCE/AMF) which are used for decoding and encoding H.264 and H.265/HEVC.

2. What are the stable graphics drivers for Intel QuickSync, NVIDIA NvEnc and AMD AMF/VCE

QuickSync: These drivers have been uploaded for your convenience here:

Other stable drivers are given below (see FAQ 10/11)

3. My conversion keeps hanging when I enable Hardware Encoding

See above to get the most stable graphics driver.

4. How do I know if MCEBuddy is using hardware acceleration

This is a two step process, first find out if your system and driver support hardware acceleration and then check if the encoder is using it.

FOR INTEL QUICKSYNC:
Open the conversion log after the conversion is complete. To check if QuickSync is supported look for the following EXACT words:

A True or False will tell you whether hardware encoding is available.
If your INTEL QUICKSYNC encoder is being used for encoding, in your log look for the words

If this line is not there then the QuickSync hardware encoder is not being used even if your driver supports it.

A True or False will tell you whether hardware encoding is supported by your hardware/drivers.
If your NVIDIA NVENC encoder is being used for encoding, in your log look for the words

If these words are not there then the NvEnc hardware encoder is not being used even if your driver supports it.

A True or False will tell you whether hardware encoding is supported by your hardware/drivers.
If your AMD AMF encoder is being used for encoding, in your log look for the words

If these words are not there then the AMF hardware encoder is not being used even if your driver supports it.

5. Suddenly my encoding time is taking very long or for some video it takes a long time

Very likely your Intel driver is buggy and is causing issues. Use the recommended version in FAQ 2 and it should resolve your issues. Latest drivers are not always the most stable or faster drivers.

If you have a bugger driver, the symptoms may vary, from slow encoding to hanging the system, crashing the system or error messages in the logs. An example of a buggy driver or if you’re running heavy graphics apps/games while using hardware encoding can take the wind out of the Intel driver and causing it to run out of resources, you might see things like this in the log:

6. My system crashes or my system hangs or I see many errors in my log file when I try to convert a video

See FAQ 4 above, if you driver is buggy it can cause unknown issues with your system, because the encoding is done in the video driver and the video driver runs in the kernel space it can use the system to become unstable or even crash. The best way to determine if the video driver is causing the issue is to TURN OFF hardware encoding on the Conversion Options → Expert Settings and then see if the symptoms go away. If do they try to update to a stable driver.

7. Is OpenCL and QuickSync hardware encoding auto enabled OR I’ve enabled quicksync/Intel GPU in the bios but it still says QuickSync is not present?

MCEBuddy will auto detect if you have an Intel QuickSync enabled chipset and enabled QuickSync encoding.

If you have OpenCL support in your driver, you will need to manually enable support for it since it’s performance varies from system to system and there is no way for MCEBuddy to tell it will make the system faster or slower.

MCEBuddy cannot auto OpenCL since it is graphics card vs CPU dependent. MCEBuddy can only auto enable QuickSync if detected.

8. I have an Intel chipset, does it support QuickSync and which Chipset provides the fastest performance

So far only Intel Sandy Bridge, Ivy and Haswell chipsets support QuickSync encoding. Of the three our research has shown that Ivy Chipset is the fastest of the three.

9. My encoding is taking a long time even with hardware acceleration enabled or my FPS appears to be slow/low

Encoding performance depends upon many factors which can impact the FPS or time taken to encode. These include:

Depending upon the above factor GPU frame rates (FPS) can vary from 25FPS to 1200 FPS which typically represent a 5x to 50x increase in comparison to non-hardware acceleration performance. 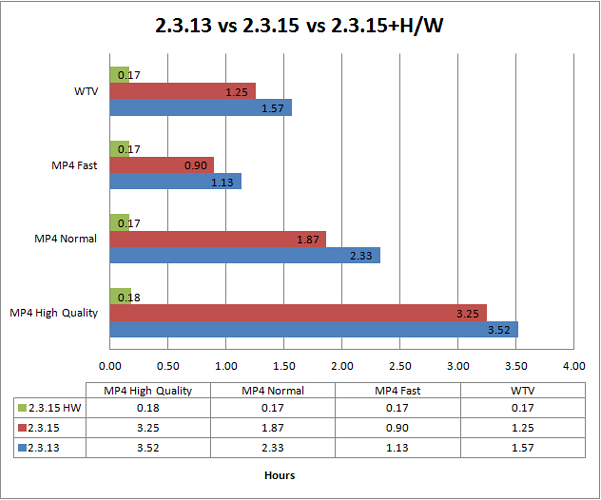 10. What are the other stable drivers for NVIDIA NvEnc

11. What are the other stable drivers for Intel QuickSync

The other stable drivers for QuickSync reported/tested are:

Extract the cab files and then install the above by running the file IgxPun.exe

The above are ZIP files (repackaged from Windows Update CAB files) and you will need to extract the files and then manually install them through the device manager using the steps below:

Just a heads up the nvidia gt 1030 does not support nvenc (hardware encoding). This is the only current exception to the rule that I know of.