EDL generation without any base file conversion/rename

I read to do this don’t put any destination path. Set to search pattern *.mkv, conversion task destination is blank, remove ads YES (Comskip), profile TS Unprocessed. When MC runs the first thing it does is a slow remux which wastes about 15 minutes and then it reports removing ads but no EDL file shows up in the source folder. How do I make the latest donator version work automatically as if I drag and drop an MVK file to the comskip.exe shortcut? Does the source file have to be in MTV or TS format exclusively which precludes using MVK format? I should add manual comskip does find commercials in the source video.

Think I found the problem when poking my head into the log while converting and noticed a mention about not being a donator, huh? I donated to a stand-alone version then installed MceBuddy a month later. Apparently it doesn’t pick up the donated version. I replaced the MceBuddy comskip folder with all contents from the stand-alone comskip folder and all appears well.

Problem now is removing commercials with TS(unprocessed) causes a fast jerky video and audio stutter, like 5x/sec on playback of the created file when using MrMc or Infuse on both the Atv4k or iOS latest version. If I use VLC on either device, playback is smooth. So there goes removing commercials without transcoding, since MceBuddy doesn’t offer many unprocessed options. Gonna try regular TS to remove commercials and see if stuttering goes away with my two main players.

Transcoding the commercials out using regular TS solves the stutter problem but cuts the resolution in 1/2. Not an acceptable workaround. Back to TS(unprocessed), I’ll try disabling processing i-frames, see if that helps. A real shot-in-the-dark approach. Sure isn’t much activity on this forum.

Disabling i-frame processing causes the output file to be seen as corrupt by players.

You question isn’t exactly clear, are you trying to generate a EDL file without modifying the source file?

If so, all you need to do is select Rename without converting, set Commercial detection to Comskip (it will automatically select Only detect ads), leave your destination folder blank. 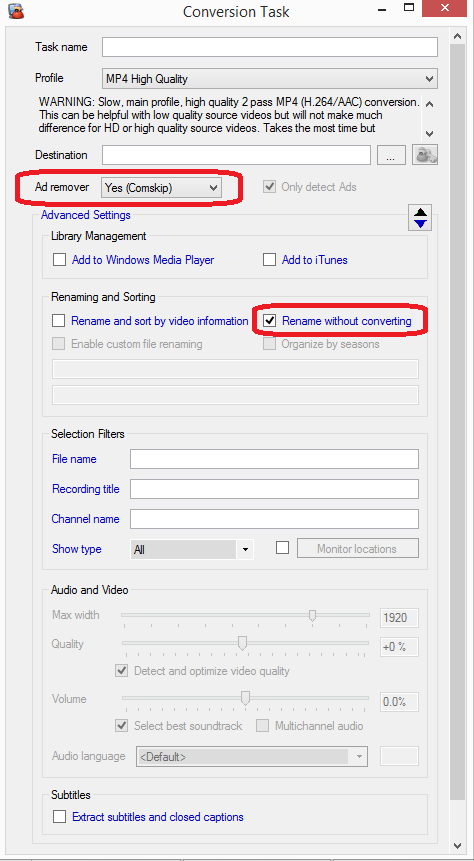 Because MrMc player uses the original file and the generated EDL to decide where to skip during playback. The processing is much faster when transcoding isn’t required. I can get an output in a couple minutes instead of the 1-3 hours required for transcoding. And the transcoded output of MceBuddy nearly always changes the original 720p to something like 592p with a non-standard aspect ratio for anything fast like MP4. And… if the EDL over flags commercials I can still watch what it over harvested. If it’s taken out of the actual playback file, it can’t be watched.