Mcebuddy unable to communicate with engine 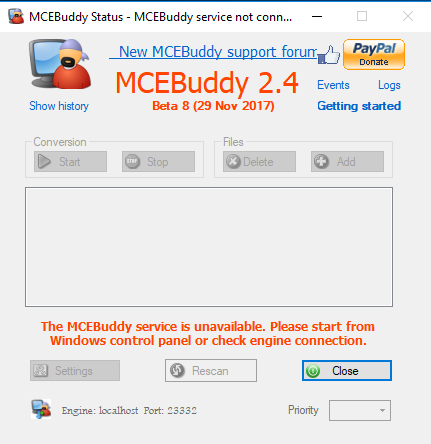 Your MCEBuddy service hasn’t started or some firewall is blocking the ports and preventing the app from communicating with the engine.

Check your windows service to see if it’s started and/or disable your windows or other firewalls or make an exception for the default port 23332.

I had this issue after the last Windows 10 Creators Update. The MCEBuddy Service would not start automatically on reboot. I could manually start the service. I set the service to Delayed Start and it has started on reboot ok since then.

Ah that makes sense. We seen complaints of many applications breaking after the windows creator update. One person reported that the firewall started blocking MCEBuddy and he had to create a rule in the firewall to open up the MCEBuddy port after installing the creator update. Thanks for letting us know the solution.

The “creator update” certainly has created headaches of users

Unfortunately not much we can do about it. You can open a ticket with Microsoft and hopefully they will investigate it.