I tried Custom Cuts for the first time. On an AMD A10 Win10-64 the video falls behind the slider or cursor keys making the process painfully slow. Anyone use this app successfully in a practical way? Background Cpu usage is only 30% and steady, only one other app running.

Custom cuts is a just a UI wrapper and doesn’t consume any CPU directly. It loads Windows Media Player to load/navigate the content. WMP in turn uses the codes installed on your machine to render the content. Most likely it’s your codec that is having an issue in rendering and/or navigating.

If you have any third party codecs installed (esp like K-Lite etc) they may be causing the issue. We recommend using LAVFilters as the codec pack (now ships with MCEBuddy starting 2.5.1) which are compatible with Windows Direct Show system without hacking/breaking the setup which many third party codec packs end up doing which cannot be reversed.

@Will_Tschumy has a lot of experience with Custom Cuts

So @Goose, ur saying the stock Win10Pro codecs are not adequate to run MceBuddy Custom Cuts? Seems suprising, but if so, shouldn’t the codecs be provided as part of the MceBuddy install? This is beginning to feel like a Win98 install.

We agree. Feel free to send a note to Microsoft on how Windows 10 doesn’t support MKV, h.265 and other common codecs.

LAVFilters is now included with the latest version of MCEBuddy but you need to select the option to install it.

I’m still a bit uncertain on this @Goose. Vlc plays mkv’s and h.265 just fine on my Win10 box and I never installed any 3rd party codec’s for this app to work. Why is MceBuddy different? It’s not like Win10 sandboxes it’s apps, like Apple, so only codecs installed for a particular app only work for that app.

I think we’re missing something in our discussion. I never claimed Custom Cuts couldn’t render, it just renders slow. Just so you know, Windows Media Player can play MKV files in native Win10, but you are correct, it can’t play h.265. However, both are rather mute points since I’m playing h.264 in a TS format which Media Player renders just fine. So are you saying the native Win10 codec doesn’t have the rendering performance that LavFilter does? I would think if my box can render a video file in WMP fine then Custom Cuts should as well.

This shows how slow the image refresh is to slider movement. Don’t see how I could make cuts in a timely fashion. Any way to speed it up? 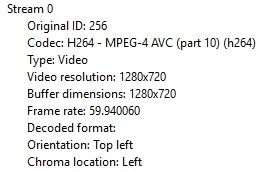 That’s very helpful. I’m moving this to bug status so we can investigate this but we need to be able to replicate the issue. Can you upload the original file causing the issue to our server.

Also can you try it on a different computer/OS and see if you’re still facing the same issue.

Don’t have another computer to try that performs well as a test box. The original file has been uploaded.

I checked it out and it appears to be an issue with your video file. I can’t even get it to play without stuttering. Either the timing if the video is corrupted of the encoding isn’t upto spec. At first I thought that the number of Ref Frames are causing the issue. Your video has 4, most videos have 1-2 ref frames. Sometimes higher ref frames often leads to stuttering. I’ve tested custom cuts with a video with 5 Ref Frames and it’s working fine, as long as the timing data isn’t corrupted.

I think it’s a combination of issues with your video encoding which is creating the issue with the WMF not being about to parse the data fast enough to render the frames. Moving this out of bug status since it’s localized to a specific video recording and not Custom Cuts.

Where/how did you record this video?

Interesting. Yes, I gotta say, now that you mention this. Video files in my library, from other sources, don’t seem to stutter like the IPTV videos recorded by TvMosaic server. Only a small percentage do. Sounds like I need to take this up with the DbvLogic folks.

After playing more videos with Custom Cuts I can say the sample video uploaded slides much better with VLC than Custom Cuts, 2x-3x better. As is the case with MOV files recorded by iPhone or just about any other videos I have in my library from difference devices. Perhaps the issue is WMF doesn’t render as well as VLC so therefore Custom Cuts doesn’t either. Long story short, I don’t find Custom Cuts very useable or practical to use. Just the way it is I suppose. If there was a quicker way to land on the commercial start/end I would use it. Thanks for looking into just the same…