Custom Cuts - How to Use with post-processed media?

Custom Cuts is a nice simple tool to understand and use. So kudos for that. However, using it with MCE Buddy for more than one-off hand curating or command-line scripting is more complicated.

It looks like when MCE Buddy processes a “Custom Cuts” file, it goes through the whole processing profiles just like the file was from the original media. I don’t want to transcode the file again, or try to rename/move the media after it has been processed or mess with the metadata in the file or the container, just snip out the commercials and lead-in that the original MCE Buddy processing missed.

Does MCE Buddy recognize when a file has the paired EDL file (why the XML option if the EDL file is used?) to “know” only to apply the custom cuts to the media and then rebuild the container to eventually replace the original file? Even better if it can do “in place” replacement.

Or do I not only have to move the file someplace else, delete the logs that I’ve processed that show before, create a new profile to do nothing and modify all of the other profiles to exclude that location so that they don’t end up processing the file? Seems like a lot of work if that’s the case.

Or do I need to figure out in advance when not to process a recording, and then manually use Custom Cuts before moving to the file to where it will be processed normally? Also seems like a lot of work, since I don’t know which shows will have commercials that got missed by the normal processing before they’ve been processed.

I would love to use it to post-process in-place simple cut editing to snip out the few commercials or lead-in that MCE Buddy misses. This is needed in particular, when stations run a “crawl” across the show and the commercials, preventing the ad detection from working, like during severe weather warnings, school closings, and election results.

If people are doing this with scripting, perhaps sharing some of those scripts would help?
Maybe setup a “Custom Cuts” profile that does nothing other than process the edits, and a script that forces the profile and does all the output and post move on success to replace the original file for simple in-place use. I don’t use MCE Buddy from the command-line, it’s an entirely automated service for me, as it should be.

Custom cuts uses the CLI to send the files to MCEBuddy. You try using the Manual (drag n drop)/CLI (command line) option in the Conversion task -> Monitor locations option to create your conversion task only process files send for conversion via the Manual/CLI options. 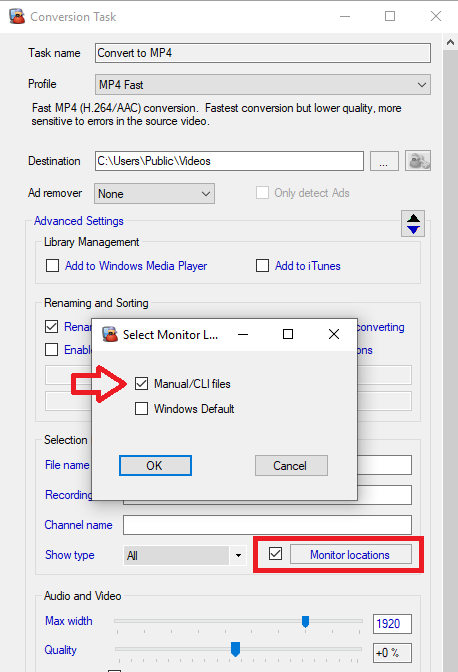