Multiple recordings get skipped on show with no episodes

I’m recording a show called “Dust” on the local TBD channel. The guide data only lists the name of the show and I think the “air date”. Because it is a compilation/anthology show, there aren’t “episodes” as such in the guide data, and unfortunately, all of the episodes were given the same “air date” in 2018.

So I see daily recordings from HDHR (I have to manually set it to record each episode) that get processed by MCEBuddy. However, I think the record-time parts of my filename and the original file are not being taken into account by MCEBuddy and it thinks they are duplicate recordings of the same show when they aren’t.

Both got processed by MCEBuddy, and I have an override to tag it to the TVDB show (ID 357506) but I’m not sure that’s getting processed either, since MCEBuddy puts it in the “Specials” category. That could be because there is no season/episode metadata (even though Plex would treat it as “S2018E0712” and put it in a “Season 2018” folder.

And the rest, I assume were treated as duplicates by MCEBuddy and skipped.

How best can I skin this cat? I don’t want to setup a profile just for one show, because I would have to put rules in all of the other profiles to exclude this one show, especially if I have to mess with the naming convention. The other profiles won’t know about it and will process the file anyway because their renaming rule will be different.

I get that MCEBuddy doesn’t use recording time because that would normally be the exact thing that tells you you recorded the same show multiple times. The challenge here is that the shows are actually different episodes, but the guide data doesn’t indicate that. So MCEBuddy (and HDHR) thinks these are all multiple showings of the same episode or show.

I think this may be the genesis of the TiVO setting in their schedule (“OnePass”) to have a setting for “record everything” and it will record multiple broadcasts of the same episode. In HDHR, I have it set to “All Episodes”, but it does the same thing MCEBuddy does, and I have to manually set it to record each individual showing of what it thinks are the same episode, the single un-named one that aired on July 12, 2018 (20180712).

So, any ideas? What I have been doing in the meantime is manually running the MCEBuddy archived recordings through Handbrake and then manually moving them to the Plex location.

Will need to logs (conversion and mcebuddy.log) to see what’s going on.

Since the filenames are different they will be treated a separate conversions. However, if you’ve enabled the Skip conversion option to check destination filename in the expert settings, that’s the only case where mcebuddy will check the expected destination name of the converted file and see if it exists and if it does then it’ll skip the conversion since it already exists. 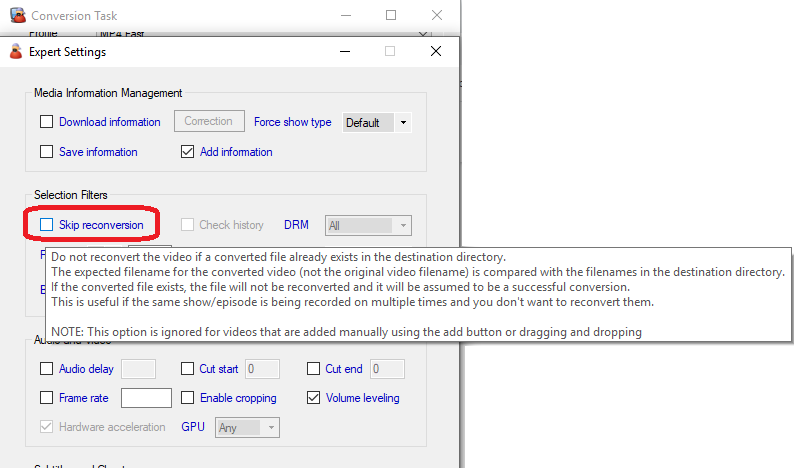 Thanks for the pointer. I dug into the log files, and it turns out that TBD has terrible guide info.
The multiple recordings were being pulled up from the guide data was indicating that the shows were all the same “episode” in the HDHR recordings. So the later recordings were skipped (as you noted by the flag above) as having been already processed.

However, the actual recordings are for different shows. So MCEBuddy is doing as it should, it is the TBD guide data source that Silicon Dust is gettting that is the root cause.

I will either have to manually rename the episodes (they usually have the title in the first few seconds) or rely on the Tivo recordings to be tagged by the recording time. Which is my next test.

If the source metadata is incorrect causing destination files to have the same name, you could use the Do not overwrite files option which will create a unique name for each destination file if it already exists. 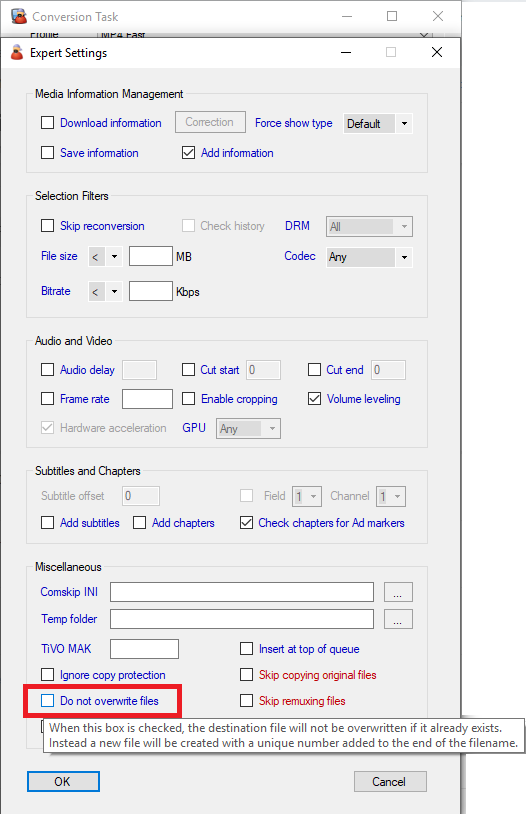 I would have to setup a profile for just this one show and have the others not process it too.

MCEBuddy can’t help TBD giving SD guide data that incorrectly says all of the episodes are the same one. Oh well.

Don’t let perfect be the enemy of good enough.