Great! Thank you for your assistance. I have provided the files for your review here:
https://1drv.ms/u/s!AgSt7TEEAf8En7Iw5bedZw2Xjl4D7A?e=VAJvqg

Please let me know if there is any further information or articles you require to further troubleshoot/debug this issue.

I’m a little confused here. According to the log file you attached above, it shows a TS file converted to M4V and there was no subtitle tracks embedded into the final M4V file as I pointed out from the logs above.

However, the M4V file you’ve uploaded has a subtitle track embedded and I can play it back. So, what file did you upload?

Apologies for the delay here, @RBoy. I was out of town and got back in yesterday, and was able to upload more information for you this morning.

To reiterate, there are two conversions occurring within the scenario we’re discussing here:

Please let me know if there is any further information I can provide to further assist.

I wanted to check in with this issue. Please let me know if there is any further information that I can provide to assist towards diagnosing and/or solving it. It would also be valuable to know if the information I have provided is useful and/or you have been able to reproduce the issue on your end with the provided data. Thank you!

I see from the logs that it failed to add the subtitles to your file:

When I tried to replicate it here with your settings and original M4V file, it worked just fine:

There’s some issue with your setup which is preventing MP4Box from adding the subtitles. I see that you have enough space so I don’t really know. All I can say is try a different hard drive for your temp folder or a different computer.

OK cool thank you for your assistance and reply, @RBoy… I’m still trying to understand the different settings here, so please bear with me. In the First conversion task I also see this same error code by MP4Box but it happens to embed the subtitles as expected in this task.

I was also under the impression that Handbrake is used to embed subtitles as well, so not 100% certain that MP4Box is the culprit here (or at least do not understand it as of yet). A lot of moving pieces here for sure.

Handbrake is used to burn subtitles (not embed).

MP4Box is the last step in the process to embed the subtitles, the logs show there is no subtitle in the file after it finishes, so that’s where the issue lies. I’m not sure why, like I said your file and profile works fine here. You can try a different hard disk/computer and see if that helps.

I had another look at your logs, in the first case the subtitles were part of the TS stream stored as closed captions. You were using a custom profile which instructed handbrake to use those built in closed captions and preserve them, which is why it worked:

One thing you can try is, enable the Skip remuxing option in the expert settings which will allow handbrake to work directly on the original M4V file instead of the remuxed TS file in the second case, it may detect the built in subtitles and work with it.

the logs show there is no subtitle in the file after it finishes, so that’s where the issue lies

Ah, so to make sure I understand, are you saying that the logs are saying the subtitles are not embedded, but they actually are in the resulting file? I can open First\NFL Football - S2019E2069 - Kansas City Chiefs at Detroit Lions.m4v in either Handbrake or VLC and see the subtitles embedded there as a result of the first conversion task. Again, the log file for this task contains the same error code found in that log file as with Second that you mentioned earlier.

Unfortunately, I do not have another machine/environment readily available to try this out on so will have to see if I can get it working with the current configuration if at all possible.

In the first conversion, your original file is a TS file which contains closed captions. MCEBuddy extracts those closed captions as a SRT file but it fails to embed them since MP4Box fails.

However you have a custom profile and in your profile you instruct handbrake to look for closed captions while converting, it finds those muxed closed captions in the TS stream and automatically converted them into an embedded SRT file.

During the second conversion you start with a M4V file which the embedded SRT file, MCEBuddy extracts the SRT file and remuxes the M4V to a TS format for processing (which doesn’t contain any subtitles or closed captions), hence when it reaches handbrake it doesn’t detect anything and when mcebuddy tries to eventually put those subtitles back into the container it’s failing on your setup.

You have three options:

However you have a custom profile and in your profile you instruct handbrake to look for closed captions while converting, it finds those muxed closed captions in the TS stream and automatically converted them into an embedded SRT file.

Ok! That makes sense to me now, @RBoy. Thank you for taking the time and having the patience to explain this to me. I believe I have enough now to take the next steps. I will try seeing if I can get the --srt-file command working, and if not, see if I can figure out what’s going on with the machine spitting out the MP4Box error.

Thanks again to you and everyone there for your great work with this product and – even more importantly – for supporting it!

You’re welcome, take a minute to help us spread the word

Enable the Skip remuxing option for your second conversion task

So funny thing along the way to trying things out here.

I was reviewing this thread and it seems I have missed your earlier post, and this subsequent suggestion.

I did try creating a new conversion task with SkipRemux=True. When I attempt to run it on the .m4v from the first task, it does seem that the subtitles are exported correctly, horray! However, it doesn’t seem to respect the .edl that was created from Custom Cuts, boo.

So, I wanted to see if there is anything obvious to consider here. What I like about this approach is that I can turn off the Extract closed captions and subtitles option and save myself an extra file hanging around with each conversion.

Check that ad detection is NOT set to none in your conversion task. You can search for EDL in the logs to see what’s going on.

You can search for EDL in the logs to see what’s going on.

Looks like I am going to need to figure out my ol’ nemesis -1073741515 here on my side regardless. I will update accordingly if I can defeat this beast.

Thanks again for your helpful guidance.

will update accordingly if I can defeat this beast.

Looks like I needed to install some missing dependencies.

And then this one from GPAC’s version of MP4Box: 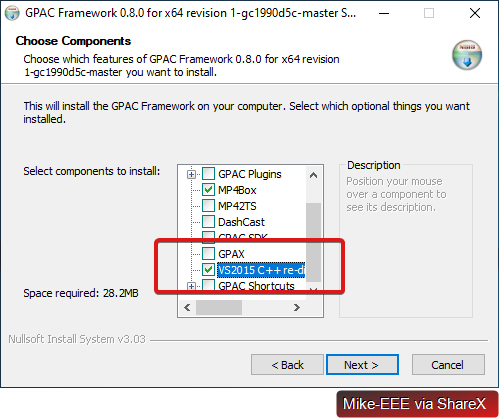 Is there a reason these dependencies are not installed by MCEBuddy by default? FWIW I uninstalled my previous version of MCEBuddy and upgraded to the latest version (October 19th) and was still unable to run MP4Box until I installed the above.

Thank you for any consideration.

Will look into it.

Great! Thanks you much. FWIW I did finally get SkipRemux=True working. While the -converted.mp4 in the temporary working0 folder did get subtitles, the resulting, final .m4v did not.

However, now that MP4Box works as expected on my machine, I am able to use the .srt as expected now, without the use of the --srt-file paramater (but still useful to know about just in case).

You’re welcome, take a minute to help us spread the word

FWIW I finally got around to it: 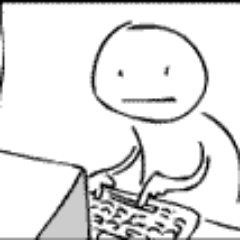 If you're getting into the DYI media game with @plex and OTA you gotta give @MCEBuddy2x a try. It's pretty easy to get a hang of and (more importantly) they are incredibly supportive of their product. Case in point: discussion.mcebuddy2x.com/t/feature-cust…

As an aspiring app/service developer myself, I fully respect the work you put into this thing. Envious, even.

This has been addressed in today’s build, it’ll install the VC 2015 dependency during setup.