I’ve been a happy and content user and subscriber to MCEBuddy for a quite a while now, but I have ‘recently’ upgraded my Media Center PC and satellite transcoder machine with AMD Polaris 11 cards to assist in transcoding and converting BD other high bitrate content.
I have had great success with an independent transcoder, A’s Video Converter, which uses AMD’s VCE hardware (the software also supports Intel QSV and NVidia NVENC) to quickly convert files to smaller h.264 compatible files.
As I have become more familiar with the software and confident that I have ‘discovered’ the right settingds for recordings that ‘require 2pass’ HQ encoding, I have now modified a few MCEBuddy rules to remove commercials, and copy the resulting MPEG2 or AVC to an .mkv file with the “save info” option selected to then later (manually) convert the resulting files and then use another rule in MCEBuddy to take the converted file, add the program data and send the file to the proper series\season folder(s).
Now that I am getting consistant and quality results, I would like to know if there is a way to add an additional encoder option to the default, ffmpeg, handbrake and mencoder tools.
It seems like MCEBuddy was designed with possibility in mind and I’m curious if this has been done by others, or if someone could provide some “generic” examples of how to implement the use of another transcoder.
I have tried combining using a combination using 2 MCEBuddy rules and A’s Video Converters “watch folder” to facilitate or automate this more, but MCEBuddy tries to decode the file being transcoded immediatly and then reports and error reading file and gives up. Then when the file has completed conversion, the file(s) just sit in the folder.
A’s Video Converter (the only (free) HW transcoder I’m aware of for AMD) does have some simple command line options and I’m sure (hopeful!) that I could get this combination working…
A’s Video Converter can transcode a show like SYTYCD or DWTS in uder 25 min (38 with Comskip) (for 43 min) whereas MCEBuddy using HQ two-pass with Handbrake takes 2hr 25min.
Converting 55 minute 1080i PBS nature docs to 1080p/59.94 shows even better performance results.
I also haven’t ‘mastererd’ or found good settings from 480i/SDTV content with A’s, but those files convert much quicker anyways… and haven’t got as much of my attention.
BlueSky A’s Video Converter 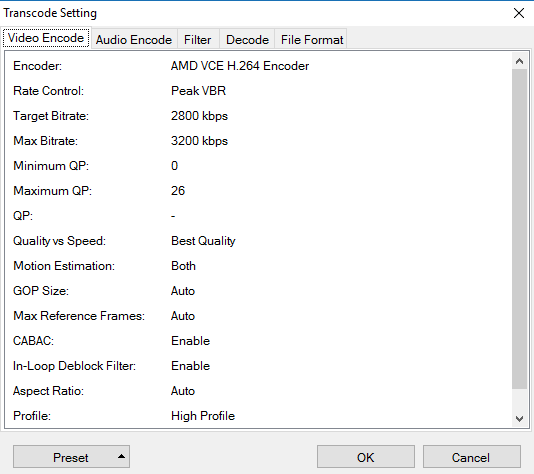 We’ve considered various additional tools over the years but not have proven as stable as ffmpeg and handbrake (mencoder is now really just for legacy devices/profiles).

I had a quick look at A’s and it appears to be a UI tool with a CLI interface, unless I’m wrong. If it does have a truly CLI interface and feedback (which is very important) or even a DLL, we can look at integrating it into MCEBuddy. I can move this to the feature requests once you confirm that A’s has a pure native CLI interface or a DLL.

I’ll take a look at a forum used for AVC and see if what you are requesting is possible – but I don’t think it does.

You mention in your documentation that MCEBuddy checks for outside parameters 3x during each conversion task.

Do you have a generic “profile” example created where I could plug in the A’s Video Converter CLI and substitute an AVC profile, etc? I know you couldn’t support this, but it might be ‘fun’ to give it a show before the Fall TV season begins again…

I’ve hacked both the profiles.conf and mcebuddy.conf files many times and nearly as many times I’ve had to go back to a clean install because I inevitably break something or adding/changing a command isn’t as straight forward as I thought.

Thanks for you looking into this and letting me know what MCB requires.

I would start with the MP4 Normal or MP4 fast profiles as a baseline. Copy it into a new profile and rename it so you can pay with it and not have to reinstall MCEBuddy.

The other place to see how parameters are built up can be seen in this post.

MCEBuddy Profiles Basics MCEBuddy profiles are in the profiles.conf file. One can create new profiles or customize existing ones to tweak them and match you requirements which very often differ from country to country. The basic intent of the...

You should also look at the advanced commands post and refer to the section on hardware optimized profiles. That tells MCEBuddy not start replacing parameters as the profile is optimized by the user.

The setting name is
UsingHardwareEncoding=true

Check out the other advanced settings for video and audio which maybe helpful.

These are the only options available

Is there any console output While running the cli or does it invoke a GUI?

I’m sorry, I didn’t see your latest reply. I’m batch converting some video’s now (using A’s) but will check out the CLI function afterwards and report back to the forum.