I bought MCEBuddy yesterday, and have a lengthy familiarity with video encoding apps. I’m stumped a little though on the workflow of MCEBuddy and have one question on best practice:

I have a large media library that is broken down into folders, such as Kids Movies, Parents TV Shows, etc.

However, if I want to have MCEBuddy monitor BOTH Kids Movies and Parents TV Shows at the same time, I can’t figure out how to have MCEBuddy dump converted kids movies into the Kids Movies folder, and parent’s TV shows into the Parents TV Shows folder, because there doesn’t seem to be any way to associate a Monitor Locations rule/directory with a Conversion Tasks rule/directory. In other words, it seems like MCEBuddy can have multiple rules running simultaneously, but I see no logical way to automate sorting into folders…

PS - I tried just pointing a rule to a single folder, having the rule process all the files in that folder and then delete the original. However, it seemed that MCEBuddy finished and then started over again, reencoding the files it has just completed (and would continue to loop indefinitely). Maybe I missed something simple and just set things up wrong…?

It would be ideal to have MCEBuddy scan folders, tidy things up, recognize when it’s done, and then only fix new items as they come in. I do realize I could just exclude *.mkv scanning in MCEBuddy but I do have quite a few mkv files that MCEBuddy hasn’t touched yet…

You can link monitor tasks to conversions tasks. See this topic

I also split my content based on kids and non-kids. I ended up making two monitor locations and two tasks. The tasks are able to handle both TV and movies assuming that you have a destination location that has Movies and TV as sub directories. I use the following rename pattern:

Here are my monitor locations and conversion tasks. Basically 2 per what I want to do. I rarely convert anymore but do prefer MKV containers so two each for that. Since output is determined by the conversion task I have two for that also. 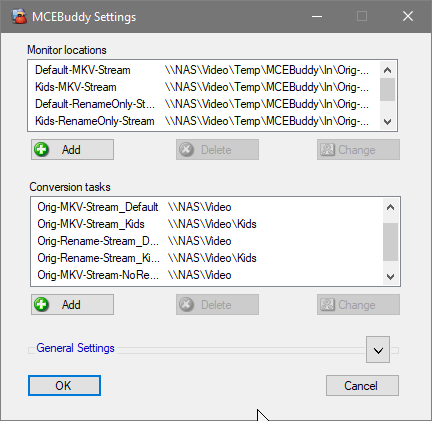 PS - sorry if this is a little scrambled was in a rush while writing it up. Hopefully it helps you out though.

Thanks for this - sorry for the late reply