Summary of the problem or suggestion:

I am trying to use the Custom Cuts tool and no matter what type of video file I have attempted to open (I tried both .mp4 or .wtv), I get the following error “Failed to load media file.”

Steps to replicate the bug:

Open Custom Cuts. Select Open Video and select a video file. It appears to be processing in the background for a few seconds and then errors. 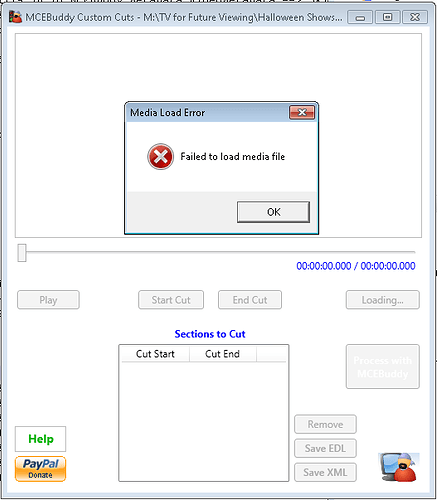 I think I may have found the issue. I have MCEBuddy installed on a processing server, so I am always connecting via a Remote Desktop session. I started the program from my local machine and the same video files loaded perfectly. If someone can confirm that RDP connections are a restriction, I would appreciate it.

That sounds right because custom cuts requires the use of Direct Show rendering codecs to load and display the clips (actually it done by windows internally by itself, Custom Cuts just sends the file to Window to render it).

Starting Windows 10 I believe that Microsoft has implemented Direct Show rendering over headless/RDP connection but I haven’t tested it for myself yet.

I have this same issue but not connected remotely. I do however have my files on a networked drive. I was able to load 1 out of maybe 20 files. The rest error out with the following message:

Windows is unable to load your direct show codes. Try to update them using the latest version of FFDShow.

Thanks for the response. I installed FFDShow by itself, same issue. Installed K-Lite Codec pack, same issue. Read it might be a LAV splitter issue, installed that on its own, same issue. I was able to load up one file but no other ones after trying these installs. I also rebooted to see if that helped, it did not. Thoughts?

btw these files are on network drives - not sure if that matters.

Still getting the same error. Should I create a new thread to get to the bottom of this? Would love to get full use of the program and $30 I spent

Custom cuts has no control over loading and rendering of videos. It uses windows player controls which depends upon windows direct show codecs. Unfortunately there isn’t a simple solution that I can offer you here. We can investigate this for workarounds but it will take time.

From my research windows player doesn’t support TS files. Why would custom cuts use a player/controls for a format thats not natively supported? i can load the file in every media player in my system (movie maker, vlc, mpc-hc, Movies & TV) except for windows media player. I have K-Lite reinstalled again and tried settings I thought would allow the codec to be used in WMP without success.

I really like the simplicity of custom cuts to remove excess from my files. Do you know of another freeware software I could use to remove the beginning and end of TS files without re-encoding them that works as simply as Custom cuts since I am not able to use it? Or any suggestions for codec settings within K-Lite (installed the mega pack) to get this to work?

I also tried the info here:
http://www.love-media-player.com/play-ts-in-windows-media-player/
and installed Haali and enabled TS when installing. Still no love. I can’t be the only one to have issues loading TS files into custom cuts…

Thanks for your help.

That’s not true. We have tons to TS files and they play just fine in media player and load just fine in Custom Cuts.

You’re confusing a couple of things. Media player is just a wrapper. What it plays and doesn’t play is controlled by Direct Show media codecs. If Windows finds a matching codec or send the video to the codec to decode the stream and return the raw data which it then renders.

There are two types of codecs, container codecs and video codecs.

TS is a container which can contain mpeg1, mpeg2, mpeg4, mpegH or any other supported video format. So when media player loads a video file the first thing it does it try to find a container codec that supports decoding TS containers. Windows direct show and media foundation layer has built in support for most common containers except for MKV (which is why MCEBuddy ships with LAVFilters which adds the codec required by media player to load MKV files)

The next step to identify the codec responsible for decoding the video stream (mpeg1/2/4/H etc). Again windows has built in support through its media foundation later for most codecs except for odd ones like flash or mpegH. (Which is why MCEBuddy comes bundled with LAVFilters which plays very nicely with media foundation later and Direct Show codecs to supplement what windows has and a great UI to switch between windows codecs and the LAVFilters codecs)

All issues that folks face are to with the codecs they use. We do not recommend the use of shark or k-lite of any of the codecs pack because they essentially destroy half the window media foundation system (literally they disable half the stuff and crack the registry sometimes so badly you can’t even restore it) and install codecs that aren’t compatible with the direct show framework which essentially breaks everything.

We have virtually no issues with any of our Test machine with most files and custom cuts. They are clean installs of windows with no custom codecs packs.

If you want to use custom cuts start with a clean install of windows and don’t install any codec packs unless you’re sure you need them.

At the end of the day though, I have no clue. I’m not a programmer nor engineer. All I know is that TS files work in everything except your program and windows media player. The only solution you propose is for me to start fresh with windows 10 which I am not willing to do since I have many other things I do with this computer besides watching TV shows which need edited. However, based on your response is, this isn’t an issue you can help me with short of reformatting my PC. I just wish there was an easy solution or at least steps I could take to narrow down the problem and fix it. Guess not. Thanks again for your time.

I just remembered I have a surface pro 3 which I barely use. No codecs to speak of installed. Actually there isn’t much of anything installed on it except for Microsoft office and a couple work programs. I just installed MCEBuddy and tried to use custom cuts. Same exact error. Tried to play the TS file in the default player. The sound played but no picture. It said a codec was needed and downloaded it automatically. picture showed up after. Tried custom cuts again. Still no go, same error. Guess I am just crap out of luck as I basically tried your suggestion, there is literally almost nothing installed on my surface pro.

Once again, that’s factually incorrect wherever you’re getting your information. Take a fresh install of Windows 8 or 10 it opens a TS container without any issues, windows foundation and directshow codecs support MP4, AVI, TS and most other popular formats, infact Windows 10 also supports MKV.

As for your error about codecs not found that’s back to my point 2, the actual video codec. I don’t know what video codec is contained in your TS files. If you want you can upload a copy of your TS file to our server and we can play it here to see it works on a stock system.

We have been saying for years that installing 3rd party codec packs like K-Lite and Shark just break the system. FFDShow is the only pack designed to work with windows instead of hacking and breaking the system.

I know you’re facing problems and it could your codecs packs which breaks windows media foundation, there’s no way to know unless you either upload the videos or take a fresh install of windows and try it out.

Honestly I could care less if Windows media player supports TS files or not. I’m sorry if my misstatements as a paying customer are bothering you (as it seems since you keep correcting me). I get it, there is nothing wrong with your software and its my fault for installing stuff on my computer. I even tried your suggestion on putting your software on a fresh version of windows (surface pro) and it still doesn’t work.

Fact is, these files are working everywhere else but your software and windows media player which I never use. I just really want it to work because I like the simplicity of custom cuts (was able to load sd 480 files just fine).

If I actually didnt like your software enough to PAY for it I would have just moved on.

Take it as a compliment that I paid for your software and would like for it to actually work for me instead of making me feel like a tool because im not smart enough to understand codecs and such and just tell you what im reading on the internet.

I’m not trying to get my hand held here im actually trying to work through this. Please let me know where I can upload a file for you to review.

Again, thanks for your help and sorry for my frustration.

Just to add - the ts files are created by Plex via Plex server on my Nvidia shield. TV is OTA and the Tuner is a HD Homerun dual.

Please let me know where I can upload a file for you to review.

You can upload them here: